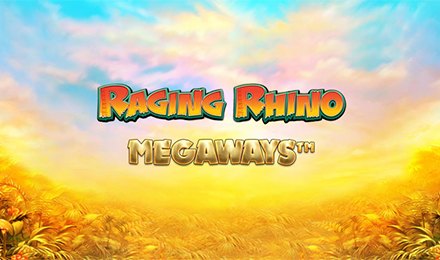 On your journey to Raging Rhino Megaways Slot meet the horned Rhinoceros along its 6 reels. The new version is back, making full use of the Megaways feature for up to 117,649 ways to win. No one knows the virtual wonders that await you on the African Savannah. Some can crop up as rewarding features like cascading reels that offers the amazing opportunity of great combos. Just land 4 or more diamond scatters to activate the complimentary bonus.

For a head start on Raging Rhino Megaways Slot, adjust your total bet according to your preferences. Once all set, click on the spin button at the right-hand side of the screen. Also, you can glance over the Paytable to know how each symbol pay. The low-value symbol includes colourful playing cards like A, K, Q, J, 10 and 9. The high-value symbols on Raging Rhino Megaways Slot is made up of the Rhino, Gorilla, Cheetah, Crocodile and Badger. AutoPlay Feature runs spins over and over up to 200.

Bet Levels: No bet levels on this slot machine.

Wild:
The wild symbol on Raging Rhino Megaways Slot is depicted by the sunset icon and it substitutes all symbols bar the bonus symbol. The latter is represented by the diamond symbol. During the base game, the wild symbol will make an appearance on the top row.

Cascading Reels:
During the cascading reels when there is one or more winning combo, the winning symbols on Raging Rhino Megaways Slot’s reels burst. New symbols will fill in the empty spaces. Symbols will drop down from the above main reels or they will fill in from the right on the top reel. Note that symbols do not swap between the two-reel sets.