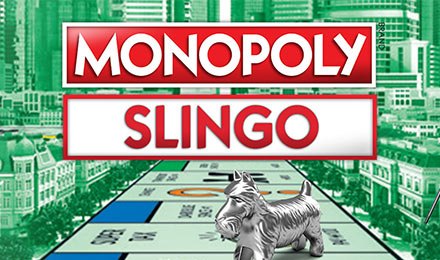 Monopoly is one of the greatest board games of all time, inspiring game providers like Gaming Realms to create Monopoly Slingo. Take a trip down memory lane and as you roll the dice, you’ll move across the board to land on various properties. Monopoly Slingo is worthy of bearing the same name as the board game. A little-known fact about Monopoly is that it was first published in 1935.

Start playing Monopoly Slingo by choosing a stake. On the game, you’ll have 7 or 8 rolls to kick off your Slingo adventure. When you land on a property the cards of the same colour are marked off. Complete the Slingos to move up the ladder. In the grid 25 of 26 property cards comes randomly. The 26th card is distributed as the bonus property. As you land on the game, you’ll be awarded an instant cash prize. The prize is a multiple of your initial stake and it increases with every subsequent land.

Amount of Paylines Selection: None.

JOKER:
On Monopoly Slingo, landing on a joker will randomly select one card from each property set. The cards are then shuffled with the player moving to the property you’ve picked.

Chance/Community Chest:
If you land on a community chest or chance card, it deals a card randomly from their respective decks. On Monopoly Slingo you can be awarded several things such as a cash prize, get out of jail card or be moved around the board including jail.

Properties:
Properties equals multipliers on Monopoly Slingo. Landing on a whole set of properties will apply multipliers to all prizes in the game’s win ladder.

Slingo:
On Monopoly Slingo, you complete Slingos for cash prizes. Your goal is to land on property to remove its set from the game’s grid.