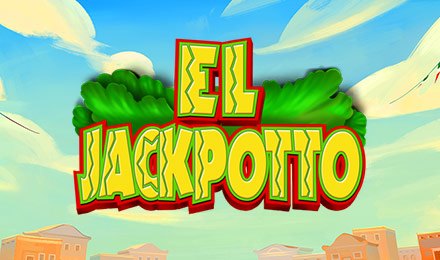 Enjoy a Mexican atmosphere on El Jackpotto Slot at Moon Games casino! It is a well-designed game by Blueprint Gaming which comes with 5 reels and 20 paylines. It revolves around the exploits of Senor Burrito who transforms into a Luchador known as El Jackpotto in the evening. He battles in the ring, hoping to achieve his big break and become the Ultimate Luchador Champion.

El Jackpotto Slot is set against Senor Burrito’s portable food wagon where he serves delicious treats wearing a sombrero and poncho. He slips into his wrestling attire when the Ultimate Luchador Bonus is activated. Find different symbols on the reels, such as Colourful Piñatas designed as playing cards, Donkeys, Skulls, Mexican musical instruments and Senor Burrito’s Golden Belt.

Click on the downward and upward arrows on the Bet field to select your preferred betting amount on El Jackpotto Slot. When you are done, click on the Spin button to set the reels in action. You can also make use of the Auto Play feature which allows you to enjoy up to 100 automated rounds. This feature can also be cancelled by clicking on the Stop button.

Bet Levels: There are no bet levels available.

Amount of Paylines Selection: The 20-win lines are active throughout the game.

Wild
The Wild card on El Jackpotto Slot is the Red Chilli Pepper which chips in for any symbol to complete winning combinations, except Bonus.

Bonus Symbol
The El Jackpotto Masked Wrestler is the Bonus symbol which helps to trigger the bonus rounds.

El Jackpotto's Bonus Wheel
Land 3 or more Bonus symbols anywhere on the reels of El Jackpotto Slot to activate the El Jackpotto’s Bonus Wheel which is the key to several other bonus rounds! When you trigger a bonus round with 4 Bonus symbols, the Spank That Ass bonus is removed from the Bonus Wheel. If 5 Bonus symbols are used, you automatically enter the Big Money Bonus. The 5 Bonus rounds awarded on the El Jackpotto Bonus Wheel are as follows: Reel Modifiers
On El Jackpotto Slot, you can enjoy different reel modifiers that are randomly activated such as:Gamble Feature
Achieve a Feature win on El Jackpotto Slot to either Collect or Gamble it. You are then awarded one of the other features, except Big Money. After the initial Bonus is awarded from the bonus wheel, a Gamble screen displays the 5 features from bottom to top, depending on their average payout. The feature you won is shown along with the words “Collect” and “Gamble” on the feature panel. If you win, the feature you gambled is collected, with all the others at the bottom removed. This continues until you Collect, reach the top feature or land on the Mystery Win segment during a wheel spin. You are also awarded a Mystery Win Prize based on a multiplier of your total bet.

Relish the delicious burritos and chokeslams while playing El Jackpotto Slot at Moon Games. All the best to you!